Who is Josie Thompson Solomon?

Josie Thompson Solomon is the 27-year-old Creator and CEO of The 444 Project, an organization with the mission to spread joy to the world.

What is Josie Thompson Solomon’s story?

Josie Thompson Solomon was raised in Mesa, Arizona and had a pretty normal and happy childhood. She comes from a great family of 6 kids and parents who have been married nearly 30 years. She had always done well in school and when she was a senior at Mesa High she was Student Body President, homecoming queen, straight A student, holder of 3 Varsity letters, very active in her church and received lots of awards her senior year including a full scholarship.

In 2008, during her second year of college, severe depression hit very suddenly and her world stopped. She literally spent the next 3 years in bed. She described it as feeling as though she were wearing a cement suit and just couldn’t move. She lost everything including her scholarship, her job, called off an engagement and eventually would not be able to serve a mission for her church that she so badly wanted to serve. In 2012 she was diagnosed as Bi-polar II. She felt nothing but darkness for many years but despite that, she so wanted to help others who also suffer and knew her darkness. So she set out on a mission to find some way to bring these people joy. In 2013 Josie created The 444 Project and knew that this was her way to reach others who also suffered and lived in darkness.

For her first 444 project, she began driving all over the United States. She drove ALONE to over 30 states, lived in her car and mostly slept in her trunk, or occasionally on strangers couches. On Sundays she would attend local churches and talk to everyone she could. When they heard her story, strangers were so kind, she usually had 2 or 3 offers for Sunday dinner! After a good hot meal if she was lucky, they would also let her shower and do some laundry while she was there. She learned how to be a very resourceful homeless girl!

She interviewed and videotaped 444 people asking them about their dreams, their hopes, their regrets, etc. and ended every interview with the question: “What gets you out of bed each day?” She chose this question since she herself had a hard time getting out of bed. The darkness traveled with her, so this was an extremely difficult project that she had planned for herself as she left behind the comforts of a home, her family and her bed, which had been her haven for the past several years.

After 3 months of traveling throughout the country, she returned home from this first project and began doing motivational speaking to church groups, schools and businesses, sharing with her audiences how you can find joy in life despite your adversity. A couple of months before this, the press had picked up the story and someone in Italy saw it and invited her to replicate the project in Italy. She didn’t give it too much thought since the first project was so difficult. She didn’t think she could do it again.

The end of 2013, Josie’s cousin and best friend, Season Joy, very suddenly passed away after the birth of her second child, 2 days before Christmas. Season was her same age and the two were inseparable growing up. Losing her was devastating for the entire family but especially for Josie.

After this tremendous lose in her life, Josie knew what she had to do. In the spring of 2014 she did another 444 project in Italy. Once again, she interviewed and videotaped 444 Italians, but this time, in honor of the life and legacy of her sweet cousin Season Joy, she ended each interview with the question “What brings you Joy?” Season had been one of Josie’s biggest advocates during the first project, so Josie knew that Season would be with her once again as she traveled to Italy, a country that Season dearly loved and had visited twice.

In October of 2014 Josie met a cute boy named Brighton Solomon. For the next 10 months they spent every day together. He too got excited about The 444 Project and its mission and together they began traveling all over the country for nearly a year. This time was replete with adventure, hardship, and a budding partnership that weathered it all. Brighton was Josies biggest cheerleader and they eventually fell in love as he reminded her constantly that she can do hard things. They worked tirelessly and together turned The 444 Project into an official non-profit organization in the spring of 2015.

This past summer they went on a third project and took 27 volunteers to the Philippines for a humanitarian service tour. The goal on this project was to now TAKE joy to this third world country as they provided much needed typhoon relief. While there, the project helped replenish school supplies and took 1,200 lbs. of school curriculum. They also helped build a school and refurbish another one, held 3 educational summits, donated a library and 100 backpacks, hosted a health clinic, worked in orphanages, spoke to colleges, schools and churches several times while there and provided over 1,000 hours of service. They also did an interview with Dateline as well as with several local newspapers and interviewed and videotaped hundreds of Filipinos asking the question ”What brings you Joy?” And it was also there at sunset on a green picturesque hilltop when Brighton proposed to Josie!

When they returned home Josie was nervous to set a date for marriage. She was scared to death to inflict her broken brain onto someone else and didnt know how a marriage could survive her mental illness. Brighton finally convinced her to trust him and God and they eloped to Vegas and were married on August 29, 2015.

Josie still spends probably 70% of her time in bed and yet she tells a story of victory. She is still very much caught in the midst of her adversity, but once she decided to “Be Brave and Choose JOY,” she began to make a difference in this world. She is real, she is relatable and she learned very quickly that “YOU DO NOT HAVE TO BE HEALED TO HELP.” She and Brighton now speak to audiences all over the country. They are both very inspirational and dynamic speakers and speak to high schools, college students and businesses. They have now blessed the lives of thousands of people who have heard them speak.

This couple has devoted their lives to serving and helping others. They will now do a fourth project in July 2016 and will be taking 50 volunteers to Africa to work in an orphanage called Falcos Childrens Village in Tanzania.

To keep traveling all over the globe and “bring Joy to the world.”

When we asked Josie what she thinks makes someone fabulous, she told us:

1) To be nonjudgmental. Everyone is fighting a battle you may not know about.

2) To be service oriented and kind. You can’t do a kind deed for someone without it coming back to you, so always look for ways to serve and help others.

3) NEVER give up the fight, keep going no matter how hard the journey!

Josie is clearly all these things and then some. She has used the adversity and illness she faces to help others, and to us, that is a pretty fabulous and inspiring thing.

Josie couldn’t pick just one, so here are her favorites:

“Opposition combined with Optimism is Opportunity.”

“You don’t have to be healed to help.”

“Keep the faith, but leave the fear.”

“Become someone’s miracle while you wait for your own.”

Learn more about Josie and The 444 Project by visiting the444project.com. 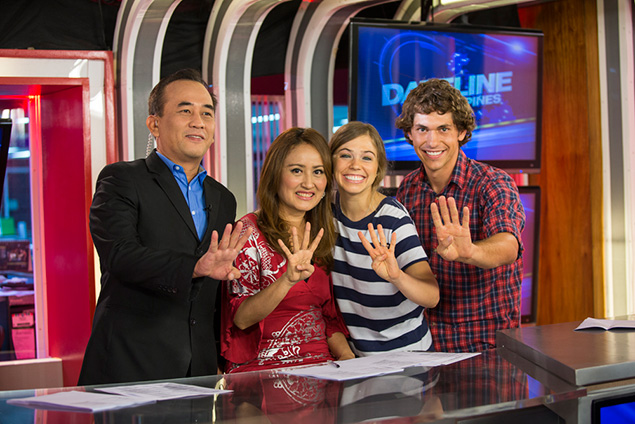